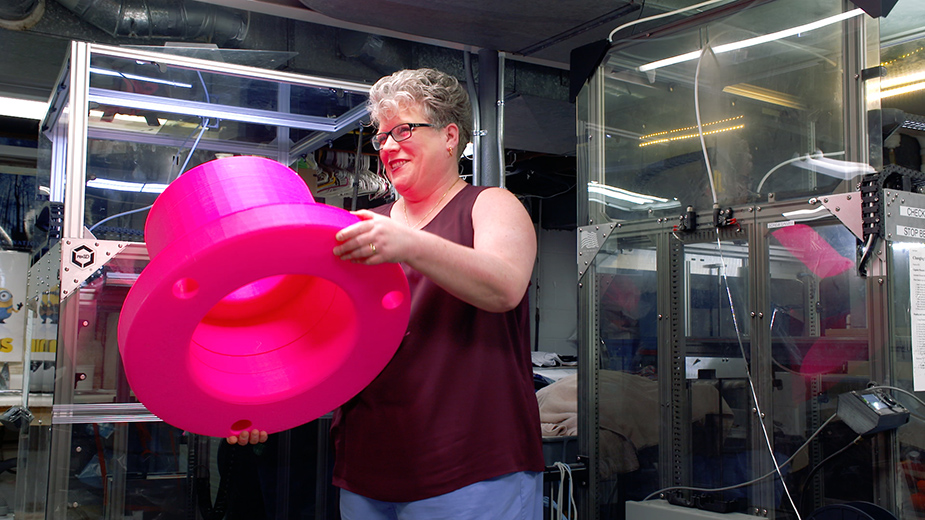 According to Women in 3D Printing, a global organization dedicated to promoting, supporting and inspiring women who are using Additive Manufacturing technologies, only 13 percent of those working in the industry are women. That’s a far cry from the organization’s goal of 50 percent.

Women in 3D Printing began in 2014 with a mission of increasing the visibility of women in the Additive Manufacturing industry. The organization, which has more than 10,000 informal members, regularly features women who are contributing to the industry, through stories and interviews and by providing monthly meetings via its global network of chapters.

One the local chapters is building a prominent presence in the Mahoning Valley, where several women are inspiring a younger generation to help the Youngstown and Warren region maintain its reputation as one of the nation’s leaders in additive manufacturing.

The Mahoning Valley jumped into the 3D printing industry in 2012 when the Barack Obama administration put one of its five National Manufacturing Institutes in Youngstown. America Makes was focused on a process called “additive” manufacturing (3D printing). The local business incubator, which had been trying to support information technology startups, pivoted to focus on advanced manufacturing.

It was during that time when this new technology sparked the interest of three women in the Mahoning Valley. Almost a decade later, the trio is not only still working in additive manufacturing, but leading the way.

Here is a look at how Cynthia Rogers (The Barnes Global Advisors), Ashley Totin (National Center for Defense Manufacturing and Machining and Pamela Szmara (Pamton 3D) got involved in additive manufacturing and the impact they are making today.

Originally from Canada, Rogers moved to the United States and spent 15 years as an advertising professional where she produced national TV commercials for such clients as Molson Breweries, Air Canada, McDonalds and General Mills. Eventually, she opened and managed a video production company in Youngstown.

Her first experience with 3D printing was at RAPID 2013, an additive manufacturing conference in Pittsburgh that featured the latest additive manufacturing innovations. She attended with no prior knowledge of the industry and left with a ton of video interviews and information, and an interest in this emerging technology.

Not long after, she started producing several videos that explained the mission of Youngstown-based America Makes and its members. In 2015, her video company was awarded the contract for social media management for America Makes.

Pamela Szmara graduated from Columbus State Community College with an emphasis in dental lab orthodontics in 1991 and received her certification as a dental technician in 1997. Soon, she identified a major need for higher quality customer service in the industry.

She opened her own lab, Live Wires Orthodontics, in 2000, with the goal of providing a more personalized experience for her clients. The lab became a certified dental lab in 2014.

As 3D printing gained popularity in dentistry, Szmara began to incorporate 3D imaging with a Maestro Scanner and later purchased a Stratasys printer in 2013. That purchase was the genesis for what has become Pamton 3D.

Pamton 3D focuses on prototype runs and additive manufacturing and has grown significantly with three Stratasys printers and one GigaBot printer. In addition, Szmara has integrated Simply3D software to further support her customers. Currently, Pamton 3D owns 10 printers and is able to print in all-plastic, carbon fiber, stainless steel, ceramic and other materials.

The company specializes in the medical, dental, defense, aerospace, automotive and engineering fields. Pamton 3D has made products such as personal protective equipment through the pandemic, holding brackets used for tractor trailers that ship automotive parts, large-volume aquarium pumps and during the holidays, even a giant green head of the Grinch.

Totin grew up in Mineral Ridge and didn’t even know what engineering was until high school. But once she figured it out, she was all in.

While attending Youngstown State University, she was one of the first America Makes interns in the Workforce and Education Outreach department from January 2014 to May 2015. That’s where she began to develop a passion for additive manufacturing.

While pursuing a Master of Science in Engineering in Industrial & Systems Engineering at YSU, Totin served as a graduate research assistant. Her research involved working with the Air Force Research Lab, Air Logistics Centers, University of Dayton Research Institute, and aerospace manufacturers to determine the best use of advanced digital manufacturing, especially additive manufacturing, to support the maintenance and sustainment of legacy aircraft in the Air Force inventory.

She went on to serve as an Engineering Project Manager for the Youngstown Business Incubator’s (YBI) Advanced Manufacturing Team where her work focused on developing cost models and business case analysis pertaining to spare part production using additive manufacturing.

Totin was also Director of the Additive Manufacturing (AM) Commercialization Program and assisted with accelerating additive manufacturing for tooling applications in Northeast Ohio.

In February 2019, she became part of the America Makes team in February 2019 as a Project Engineer. In this role, she manages technical programs as the regional point of contact, supports America Makes Workforce and Education development, and contributes to the innovation facility and regionalization efforts.

She was named Mahoning Valley’s “Young Professional” Engineer of the Year 2019, hosted by the Tech Belt Energy Innovation Center (TBEIC) in partnership with the Valley Alliance for Science and Technology (VAST). The TBEIC is a federally-funded business incubator aimed at growing energy technologies, while VAST is a member-driven organization created to foster an environment of technology innovation, application and growth in the Mahoning Valley and surrounding area.